What constitutes a ‘solo’ album? Some artists fill the studio with a whole plethora of hired help but I don’t go that route. I work alone methodically to create a recording. Guest vocalists I feel don’t distract from the core of what I want to do, in fact they make it more worthwhile for me. I don’t think I compromised on the talent on ‘Slope’, which is important. For me it’s an album of people doing what they do best, and yet the list of contributors is fairly minimal. I’ve worked on many solo artist’s recordings and they are often anything but. 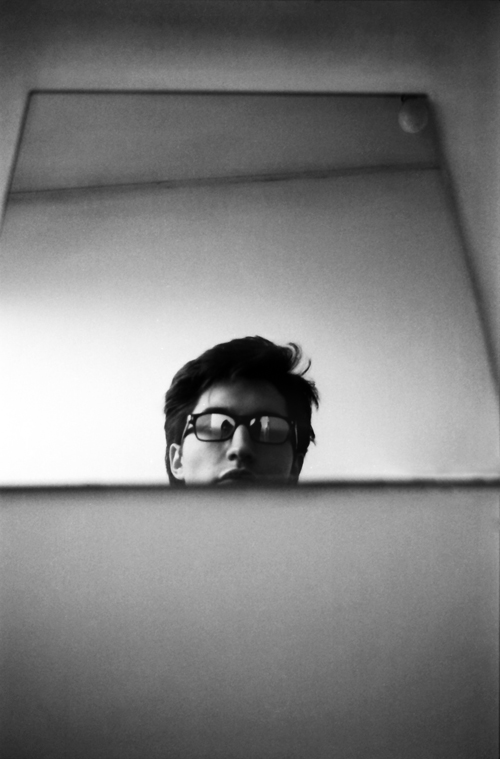 Self mirrored. Photo by Steve Jansen

No you’re not wrong. If it weren’t bad enough that the ludicrous concept of ’gods’ still has to be tolerated, the very fact that organised religion is still able to wield influence over civilised societies is, to me, utterly disappointing. Governments of the civilised world ought to have by now started introducing alternative education programs to initiate the eradication of religion from society, and importantly, stop teaching children to adopt the concept of ‘gods’ as if it were part of a reality, which is borderline corruption. Blind faith was a state of mind much more pertinent to our ancestors, but we don’t need to be carrying that baggage anymore. I’ve always felt that the institutions of religion distract from the responsibilities people ought to take as individuals. Schools should be teaching about respect and love on a level playing field instead of attempting (and forever failing) to teach tolerance of one another’s faiths. I do have faith … that religion will eventually become a thing of the past, but it’s one heck of a gradual letting go.

I don’t feel compelled to see live music shows at all, I’m content with the recordings. I probably haven’t purchased tickets for a concert since I was in my teens, with subsequent outings being via invitation, however I tend to pass on those these days. I simply don’t have the attention span for it. By way of example, when Richard (Barbieri) played at Bush Hall, just down the road from where I live, he didn’t bother to invite me because he knew I wouldn’t go, that’s how bad I am. I’m more likely to see a play or stand-up (comedy) where I feel I can escape in a performance unrelated to music, and with much less of a cost to the old audio equipment … (concerts do wreck your hearing, as does playing live … not good).

‘Whiplash’ was entertaining in portraying drummers as though they were in some sort of army bootcamp. Plenty of focus on technique but very little on the emotive side of playing. Of being inspired or creative and deviating from the standard. Great technique is always a joy to behold but it’s not generally something that lives on in the psyche because it doesn’t reach beyond the appreciation of basic prowess. What is the purpose of playing something really, really fast? Where can it lead? I’d much rather hear it played ‘beautifully’ – but I don’t suppose they’d make a film about drumming beautifully (imagine trying to pitch that to the producers). But if you’re into appreciating drumming on an Olympian level, then it might grab you, and the rush of that type of approach is much more Hollywood’s bag.

There were a few adapted versions that I worked on for the Nissan TVCM which  were all of a similar, required length for the TV commercial … nothing longer I’m afraid. You can find a few variations on my soundcloud page: www.soundcloud.com/sonicyard

Thank you Leonne. I want to provide a satisfying answer however I find it very difficult to transport back to the concept of covering music that I grew up with. But it’s particularly difficult with a band such as Roxy Music since they created such unique music with wonderful arrangements and great musicianship. As a band they provided a precedent that helped to set my own band creatively in motion. Any covers would need to be radically different to be truly worthwhile and you know how it is when you hold something in high esteem … you don’t really want to mess with it.

The copyright for this DVD release is owned by Epiphany Works in Japan and the decision rests with them as regards reissuing. You could I suppose try contacting them to enquire about remaining stock or any thoughts on a reissue. (info@epiphanyworks.net).