I’ve used a Mac since the mid eighties when the MacSE was released with a whopping 128k built-in and would only start-up from a floppy disc – yet it cost more than a MacBookPro does today which is even more shocking when you consider it’s old money. Unbelievably limited, and yet it worked fine for midi recording. Most people were wondering why I wasn’t going with the industry standard at the time (Atari) but I somehow felt there was something more special in the Mac build. I’ve wanted to find an excuse for an iPad purchase but have yet to do so. It’s a lovely machine though. I was tempted when I started playing 8Ball on my son’s iPad but that wasn’t enough to make me invest. I’m not a fan of touch screen typing … I do like to feel (and hear) those buttons … and to type ‘blind’, so the same goes for the iPhone, (which is why I’m still using a Blackberry). I think there are some great apps though, but none that I need.

I remember it was an amalgamation of all kinds of percussion as well as a regular drum kit. It was recoded piecemeal which perhaps explains why the pattens sound less commonplace. The main rhythm pattern from part 1 and into part 2 was played with fingers on a large drum, extremely close mic’d. In part 2 the high end sounds are wire brushes on metal objects, (probably chinese cymbals stacked on the floor) and that’s a regular snare drum that has the snare (snap) off. Part 3 incorporates log drums and cymbals. I don’t have a particular memory from recording those tracks except that I spent a lot of time exploring ideas on my knees!

Berlin Sessions for Brilliant Trees 1983 featuring Ryuichi Sakamoto working on a piano arrangement for Forbidden Colours prior to recording. Documented by Steve Jansen.

my son Jude has brainwashed me with the looping world of Monster Rally, but then I’m old enough to remember when the vinyl would get stuck … it’s more of a novelty to his young ears. it’s easy listening. My respect goes to Jannis Noya Makrigiannis (Choir Of Young Believers) for the track ‘Hollow Talk’.

Hi Val. Thanks for your comments. I must confess I didn’t feel like model material and have never enjoyed being in front of the camera (despite the amount of photographs that appear to be out there … partially attributed, I suspect, to the Japanese love of imagery). I think you have to have a certain confidence to present yourself as a model, which I certainly didn’t possess. Is it too late now? 🙂

Thanks for your support and kind words, Katie. I’ve never really given much thought to publishing footage before now so I’ve not planned anything. Let’s see.

There weren’t so many interior images from the studio recording sessions, mostly exteriors around the Berlin wall. Here’s another scan of Holger from the contact sheet. Movie footage is insightful, if only into how much sitting around listening goes on. 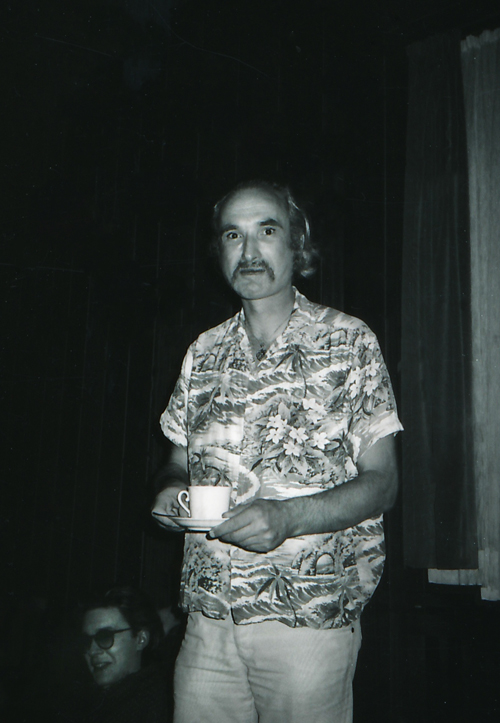 Holger Czukay during the Berlin sessions for Brilliant Trees 1983. Photo by Steve Jansen